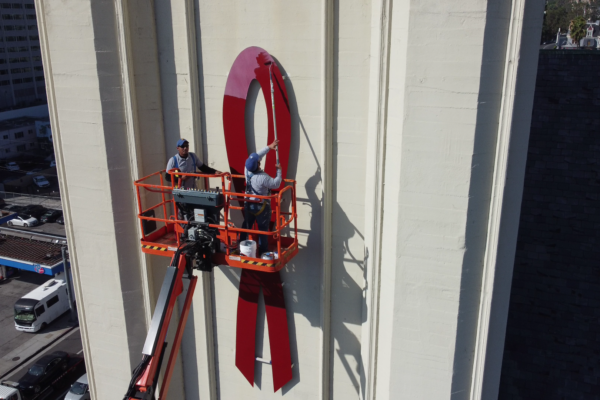 2023 will mark the 30-year anniversary of the red AIDS ribbons on the tower of the Hollywood United Methodist Church, a progressive community of faith in the heart of Hollywood. To preserve the history
of these ribbons and their importance to the LGBTQ community, we are creating a 10-12 minute documentary, narrated by church member Pauley Perrette (NCIS). This documentary, available for upload to multiple platforms, will include a repainting of the ribbons as their story is being told. This documentary and the repainting is generously funded by the National Trust for Historic Preservation.

Here is a preview of the documentary film: 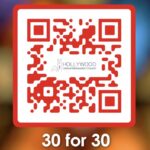 Help us raise a goal of $30,000 to continue ongoing restoration of our Red Ribbons on our bell tower into the next decade.  Over this next year, we are asking people to donate $30 dollars on the 30th of each month.  You can also give a 1 time donation.  Please scan the QR code to the right to get more info and a get a private link via email from our Business Office (melissa@hollywoodumc.org) on how to complete your donation.  Thank you for supporting these last 30 years as we look into the future!

Hollywood United Methodist Church has long been known as a theologically progressive congregation in which the LGBTQ community is welcomed and affirmed. Its Gothic style cathedral, built in 1929, stands
in the heart of Hollywood as a beacon of hope to all who have been affected by the AIDS pandemic. In 1993, when the LGBTQ community was being denied services at barber shops and nail salons; when Ryan White was not allowed to attend school because of his diagnosis; when even churches were closing their doors to LGBTQ persons for fear of “catching AIDS” this congregation proclaimed that all are welcome here by affixing two red ribbons of love to the sides of the tower. But that was just the outer face of our compassion and mercy. Inside the walls was where the hope was truly found.

Before there was an APLA or Project Angel Food, or even the medication AZT, we as a congregation were caring for those affected among us. We took folks to the doctor, prepared and delivered meals, and prayerfully stood vigil as far too many of our loved ones passed too soon from this life to the next. We wept, we laughed, we cried; and we remembered.

When the NAMES Project needed space to make quilt pieces, one of our rooms was turned into a beehive of sewing and creativity. When congregations were called upon to take a day per month and prepare lunches for the folks without insurance coverage, awaiting treatment at the LAC-USC 5P21 clinic, we signed up for the third Friday of each month, which we faithfully provided for 25 years.

In 1994, when Pedro Zamora of The Real World: San Francisco, died of AIDS, we hosted his memorial to a standing-room-only congregation.

Over the years our pastoral care and public witness has grown. We have raised funds and gifts for children of the Serra Project and Tuesday’s Child. We wrote letters to a major diaper manufacturer during the days they refused to donate their product to agencies caring for babies with HIV because they didn’t want “that sort of association.” We have been one of the longest congregational supporters of Strength for the Journey, a camp for adults living with HIV, begun by our own senior pastor emeritus, Dr. Ed Hansen. For years we were consistently one of the largest groups to raise funds in AIDSWalkLA.

Again this Advent we decorated our beautiful compassion bears, we’ve loved them up, and we will send them on prayerfully to be embraced by children aged 0-12 who are living with HIV and being treated at LAC/USC Pediatric AIDS Clinic.

Over the years, we have helped form a human red ribbon at Dodger Stadium as part of Strike Out AIDS, just one of the many education and prevention programs of The Wall/Las Memorias, which also developed and built the first publicly funded AIDS memorial in Lincoln Park.

The red ribbons on our tower continue to inspire others to have compassion for, and welcome, all persons no matter whom they love.

To learn more about this or for upcoming events, contact the HUMC office 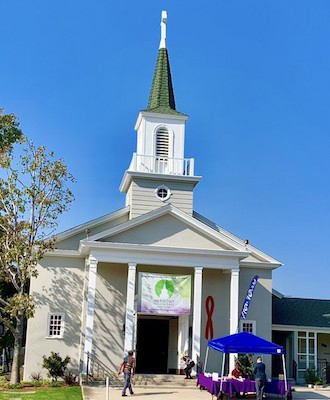